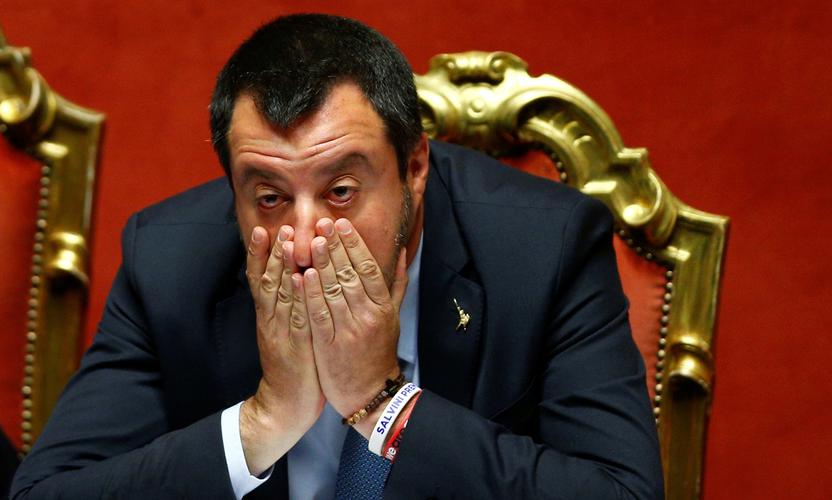 Salvini announced that the Lega party will withdraw its support from the current coalition and demanded a vote of confidence as early as next week, aiming to bring down the government and hold early elections.

The Italian government has been on shaky ground from the beginning, with Lega and 5SM often at odds on core issues. The latest vote on the project to build a high-speed train link between Italy and France brought the two parties into direct conflict, with Lega voting in favour of the plan and 5SM against it. While the project was eventually approved, it looks like it was the straw that broke the camel’s back.

Salvini, backed by support in the polls (Lega currently polling at 36 percent), is pursuing an agenda without 5SM, which has lost considerable ground in the past year - the latest polls give the party only 16 percent of the popular vote, behind the opposition Partito Democratico (PD) at 20 percent.

Elections will come at a difficult time

Assuming a vote of no confidence is held in the next two weeks, the earliest that elections could take place would be mid-to-late October, with the 13th or 23rd October suggested as potential dates.

The timing is not only unique, as Italy has never held elections in the Autumn, but also coincides with sensitive 2020 budget negotiations with the European Commission (EC). The institutional process requires elections to be called by the President, Sergio Mattarella. He will have to decide whether to dissolve parliament and set an October date for the vote or hand the reins to a temporary, technocratic government.

With any budgetary draft having to be approved by parliament before being presented to the EC, it is unlikely that Italy will manage to meet the initial mid-October deadline. The final 2020 budget is due by the end of December, although the shape of parliament by then, and its attitude towards the budget negotiations, is likely to change.

Based on current polls, Lega would comfortably be the leading party in the new government, alongside a smaller coalition partner from among other centre-right parties to ensure a majority. Emboldened by the rise in support, Lega is likely to take an antagonistic approach towards its European partners in the negotiations on the budget.

While on balance Lega’s own spending plans are relatively more conservative than those pursued by the current coalition, their push to have a flat tax is incompatible with the fiscal constraints that Italy faces. Moreover, the government faces automatic stabilisers, notably the increase in VAT, that would come into play if the budget is not approved in time. Salvini has been adamant that VAT will not increase; however, this means having to find around 23 billion euros to keep the deficit in check.

BTPs and banks under the spotlight once again

The sharp change in the political backdrop has led to a resurgence in volatility. Italian government bonds, in particular, have come under renewed pressure after several weeks of strong performance. The European Central Bank’s dovish stance and guidance towards more quantitative easing (QE) had temporarily soothed concerns around Italian politics, with the ensuing search for yield pushing the spread between 10-year Italian BTPs and German Bunds below 200bps in mid-July.

Reminiscent of the moves in August and October last year, investors were quick to reprice BTPs, with the spread now at 230bps, widening 26bps in a day. We have held a cautious stance on BTPs for several months, wary of a sudden return of political risk. With these concerns materialising, we see BTPs remaining under pressure until there is more clarity on the new government and the budget.  The rise in political tension in the Autumn will likely coincide with the announcement of further easing from the ECB, including a new round of QE.

This would provide some support to the Italian market, although a new QE package is largely priced in so there is a high chance of disappointment should the size of purchases underwhelm. QE is also no panacea for idiosyncratic risk; in 2018, when the BTP spread over Bunds widened by over 200bps, the ECB’s QE programme was still in full swing.  On the other hand, we acknowledge that, with most European government bonds offering negative yields, Italian BTPs can be attractive to income-starved investors, at the right price. Compared to previous episodes, the underperformance of BTPs may be less pronounced this time around, and we would look to pare back our underweight should spreads widen further than we expect.

On the credit side, the sovereign-bank nexus is still strong. Italian financials are large holders of BTPs, and their bonds have a high beta to the sovereign. However, for Italian national champion banks, the implications of wider BTP spreads on their capital position is less pronounced than in the past. The two largest banks have right-sized their BTP holdings and shifted positions to the ‘Hold to Collect’ portfolio, which is not marked-to-market, thus reducing the sensitivity of the Core Equity Tier 1 ratio. Moreover, the big banks have offloaded a large share of their non-performing loan exposures in the past year, further reducing risks to their capital position.

Look for actions, not words

Since the beginning of the year, our exposure to Italian credit, and financials, in particular, has been meaningful reduced. This fits with our cautious view on the sovereign and generally expensive valuations. Italian national champion banks, however, have robust capital positions and any further weakness is a chance to add exposure.

Overall, an uber-bearish position offers little advantage for investors. We expect a deluge of populist messaging from the leading parties in election campaigns, including fiery confrontations with the EU on budget issues. But, as the political dust starts to settle, Italy is likely to soften its approach and propose a feasible compromise. A one-sided populist government, led by Lega, would have less to deliver than a government split between two warring parties. This may bring opportunities at attractive prices.