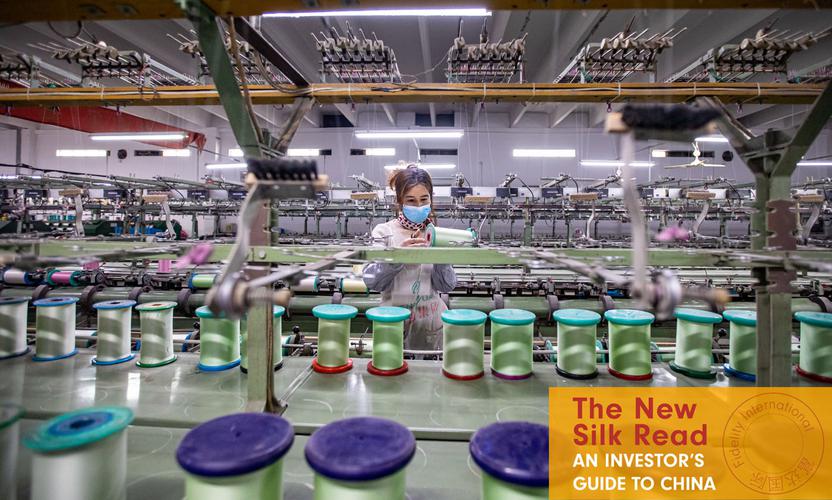 China’s worst quarterly contraction in decades was largely in line with low expectations: overall GDP slumped 6.8 per cent year-on-year in the first three months and was down about 10 per cent from the previous quarter. What really matters now, according to Fidelity International’s investment managers, is the pace of recovery following its lockdowns, which will serve as a bellwether for the rest of the world.

While households still seemed to be struggling in March, we see rather good news in the Chinese corporate and industrial sectors. State-owned enterprises are driving a rebound in investment activity, real estate is picking up, and manufacturers are quickly recovering with the outbreak now under control.

“Across the board, we are seeing signs that this is an economy very much emerging from the phase of economic activity being heavily restricted, as it dealt with the containment of the virus, and starting now to move into more normal activity patterns,” says Paras Anand, Chief Investment Officer for Asia Pacific at Fidelity International.

Digging further into the data, Ian Samson, Multi Asset Portfolio Manager, notes “the best news came in industrial production numbers, where the fabled ‘V-shaped’ recovery seems to be materialising.” March saw an unprecedented 32 per cent month-on-month bounce, taking output to within a whisker of 2019 levels after a horrific start to the year. “This speaks to the relative ease of reopening manufacturing sectors over services in a world of social distancing,” Samson said.

Investment spending may look disappointing with a double-digit year-on-year fall in the first quarter. However, on a seasonally-adjusted basis, levels of investment activity seemed to have recovered half of the plunge seen earlier this year in March. Samson said this was mostly driven by state-owned enterprises, compensating for reluctance or inability in the private sector to get ‘back to normal’. China’s heavier government influence may allow the country to bounce back quicker than most others, he added. Also notable is the recovery in China’s all-important real estate sector, where investment has jumped back to 2019 levels in the latest month.

Retail sales in China did seem to grow month-on-month in March after falling a combined 16 per cent in the previous two months, but they are still far from a ‘V-shaped’ recovery at this point. Growth in consumer spending remains far below China’s usual-robust uptrend and has done almost nothing to unwind the previous plunge.

More views from the investment desk:

“What we have seen in China may give us some indication as to what could be experienced in other parts of the world where we see effective containment strategies, curves flattening and economic activity returning. We have also seen globally strong levels of government and central bank intervention, particularly in the US and Europe and these may help to support growth over the medium term. Since the first quarter ended, we have seen a strong recovery, both in consumption and fixed asset related activities. There was an announcement that schools would reopen and we have seen the lifting of restrictions on people being able to leave Wuhan. More broadly we are seeing 90 per cent of people return to work by the second week of April, and 90 per cent of construction activity restarting, especially in the context of infrastructure related projects. More specifically for consumption, we’ve seen auto passenger sales, which were down almost 40 per cent in the first quarter, were down low double-digit per cent by the first week of April and turned positive in the second week.” --Paras Anand, Chief Investment Officer for Asia Pacific

“On the positive side, disposable income only declined 3.9% (real basis). Most of the activities recovered quickly in March. I expect a strong recovery in the second quarter. Going forward We will continue to see structural improvement in GDP composition, with consumption taking a much bigger part and trade becoming less important. I expect trade data will be much weaker in the second quarter due to the global outbreak of Covid-19. Domestic consumption and FAI related activities, which recover quickly since April, will become even bigger. There is high expectation of more stimulus policy to be announced during the NPC and CPPCC meetings. The market may be disappointed as the policy tone has shifted to stable employment from a high GDP target. Small scale stimulus may still happen, most likely to encourage consumption and technology investment.  I do expect more reform and opening-up policy, especially for the financial industry.” --Lynda Zhou, Equity Portfolio Manager

“Despite a cataclysmic quarterly GDP print, China’s March activity data gives cause for optimism. Manufacturing and construction sectors seem able to quickly resume, helping to prevent long-lasting economic damage, and are far less impacted by social distancing than service companies. Retail sales may yet recover along with this better corporate outlook, although consumer deleveraging and the burdens caused by foregone income may weigh for some time. However, China’s ability to bounce back may be unique in the global context. The state sector’s heavy role in the economy can offset still-damp animal spirits in the private sector, whereas Western governments’ success in pulling hard on new fiscal levers is untested and unproven. China remains more of a manufacturing powerhouse than many services-dependent Western economies. And of course, China can rely on an enormous domestic market where coronavirus seems largely contained and normal life can resume - which is far from a foregone conclusion in the US or Europe.” --Ian Samson, Multi Asset Portfolio Manager