A strong showing for populist groups has the potential to feed back into the national politics of member states, with ramifications for sovereign bond markets. It may also upend the status quo on Europe-wide finance, trade and budget policy, disrupting decision-making processes. 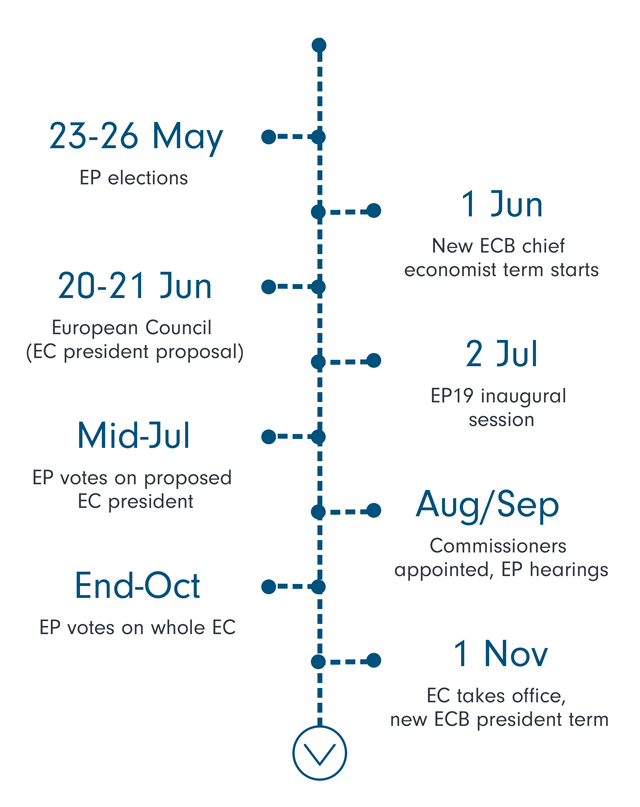 Rise of the populists

While social democrat, liberal and centre right parties have dominated elections in the past, steadily declining participation rates have helped far right parties gain a foothold. Lower turnout, combined with a proportional representation system, favour non-mainstream parties. And this year momentum is with the hard-right.

According to our ‘extreme case’ projections, populist and eurosceptic parties could capture more than 30 per cent of available seats in the 2019 EU parliament elections, leaving centre right and left parties in the minority for the first time. At the lower end of our projections the populists would still gain almost 25 per cent of MEPs.

The impact of populist parties is amplified by increasing coordination between right-wing groups, and the fragmentation of parties holding the centre ground. A large Eurosceptic contingent could be unified into a single populist group if Italian deputy prime minister, Matteo Salvini, succeeds in amalgamating the Europe of Nations and Freedom (ENF) party with the Europe of Freedom and Democracy (EFDD) party and the European Conservatives and Reformists (ECR). Such a coalition has the potential to be seriously disruptive. “Our target is to win and change the rules of Europe,” Salvini told a packed hall of supporters in Milan this month.1 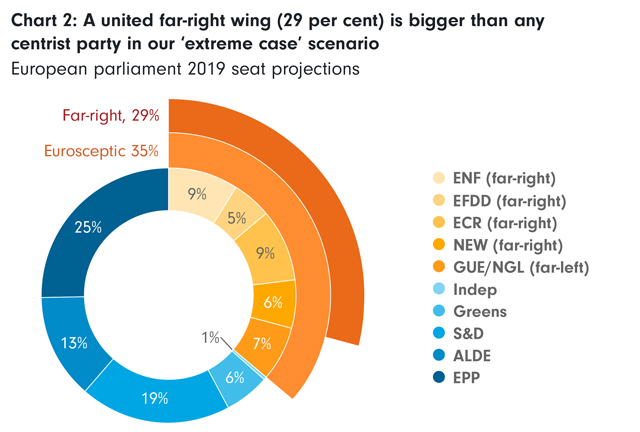 The Hungarian ruling party Fidez, nominally a member of the centre right European People’s Party (EPP) but with eurosceptic leanings, also complicates matters. Under Victor Orban, the party has been sanctioned and warned about possible expulsion from the EPP, potentially robbing the centre right of 14 MEPs and tipping the balance of power further towards the extremes.

The UK has confirmed it will participate in the elections and will keep its 73 seats. At the time of writing, and according to the latest projections, around 32 of the UK’s seats would go to eurosceptic parties, with the other 41 split between Labour, Liberal Democrats, Scottish National Party, Change UK and other parties.

A strong showing in Europe can increase the influence on policymaking within individual member states of nationalist or single-issue parties. The United Kingdom Independence Party, or UKIP, is a good example of how a fringe party can use European elections as a platform to break into mainstream national politics. Its 13 per cent share of the vote in the 2015 UK general election followed a strong showing in Brussels in the previous year. This is an established strategy, recognised and pursued by the parties on the extremes of the political spectrum. 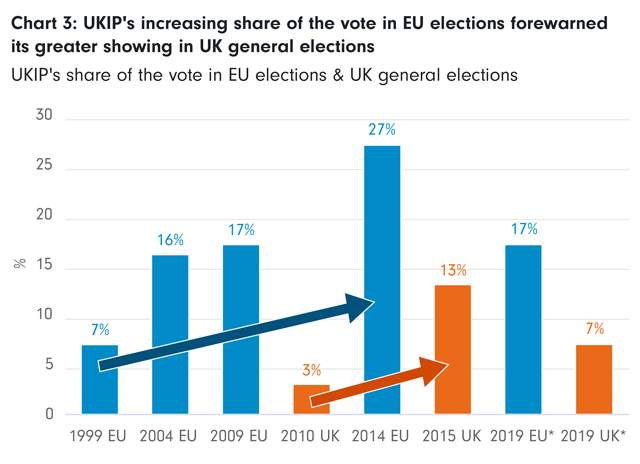 On day one of the results, fixed income investors will assess the outcome of the EP elections through the lens of the sovereign bond markets.

The Italian market is particularly at risk. It’s possible that Salvini’s Lega Nord party could use a strong performance in the EP elections to force a domestic general election to capitalise on its popularity. That could spark a loss of confidence among Italian bond investors concerned about undisciplined spending following a controversial 2018 budget, which relied on bullish growth projections to balance tax cuts and transfers, instead of structural reforms. Italy already has one of the largest debt-to-GDP ratios in the developed world, it faces demographic headwinds, and suffers anaemic productivity growth.

If the country were to enter recession while maintaining its current level of spending, Italy’s debt-to-GDP ratio could rise substantially, rather than follow the government’s projected decrease to below 130 per cent. Higher net bond supply to finance the government debt combined with a high debt load is likely to widen BTP spreads over bunds. And if the country loses its investment grade credit rating status (at BBB it is only one notch above sub-investment grade) at all four major rating agencies, the effects could be disastrous, although this is not our base case. Higher borrowing costs would be amplified as the ECB, an important buyer of BTPs, would be unable to continue its purchases as part of its Public Sector Purchase Programme.

Given the size of the Italian economy, the negative effects of a downgrade could spill over to other European markets, with volatility likely to spike as a result. Italy is the Eurozone’s third biggest economy and contributes around 11% of the EU28’s real GDP.

While the impact of the 2018 budget clashes between Italy and the EU was contained to BTPs and did not extend to other peripheral countries, the same may not hold through today’s more strained macro environment. Italian banks have long held a large government bond exposure and are the main conduit of volatility from financial markets into the real economy. Other countries in Europe, however, are unlikely to remain immune, with France, Spain, Portugal and Belgium still particularly exposed to Italy through their banking sector.

Spain is often viewed as the most likely contender for Italian contagion, and it has its own problems with populism. The EP elections come one month after Spain’s general election (28 April) and are likely to fall in the middle of negotiations to form the next government. A strong performance in the EP elections could strengthen the hand of disruptive forces on the right, such as Vox, and on the left, like Podemos, in those negotiations. While Spain escaped contagion from Italy in 2018, a new political dynamic favouring populists could persuade the market to re-think Spain’s insulation. 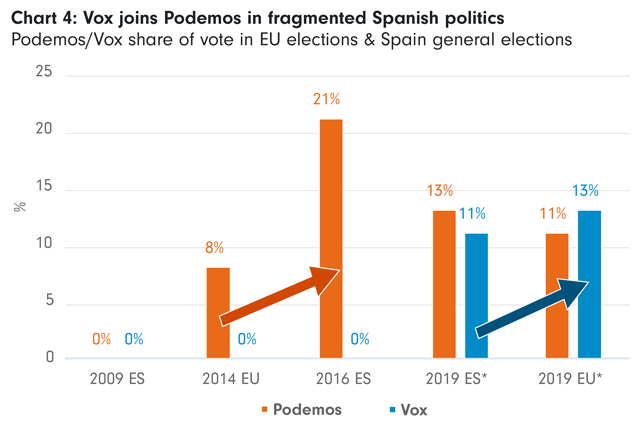 Should populists gain a sizeable standing in the parliament, the implications will go beyond national politics. Together with the EU Commission and Council, the Parliament is a key institution in the bloc’s decision-making mechanism. As such, further fragmentation of the Parliament’s centre parties would be a challenge to the process of consensus-building needed to ratify trade agreements, policies and laws. There are several areas where an impasse could be particularly acute.

A parliament dominated by nationalist interests may present an obstacle to finalising a full banking union and capital markets union, creating uncertainty around the future of EU financial integration. The completion of these policies would be important milestones in strengthening Eurozone financial governance and resilience.

Parliament’s assent is also needed on trade issues, for example in striking agreements with the US, China and Britain, once the latter leaves the EU. The US is agitating over its trade deficit with the EU, and a divided EU would weaken its hand in any renegotiation, hurting the block’s long-term economic growth prospects.

Meanwhile, the EP must approve the 2021-2027 EU multi-annual financial framework. EU budget talks are delicate and difficult at the best of times. Were the balance of power within the parliament to tip towards nationalists, even more uncertainty would creep in to the process, potentially leaving some EU programmes facing a future of underfunding. This could eventually harm the bloc’s competitiveness in areas such as scientific and technology advances in an increasingly competitive world.

Finally, the parliament has a role in overseeing the leadership of the European Central Bank. With a succession process for its president underway, the EP election could inject an element of uncertainty there, too. While this is not a central risk given the strong set of candidates, the process of hearings in the EP could turn fractious if populists build on their existing influence. More importantly for the future, the ECB is more effective when there is stronger, not weaker, institutional solidarity in the EU.

The European Union is being pulled in many different directions, and next month’s European Parliament elections could reflect these tensions. If radical parties increase their share of the vote, parliament will become a forum for intense battles between those who favour integration and those who seek to undo it.

A strong showing in the European Parliament elections by radical and nationalist politicians could have real ramifications for domestic politics, exacerbating the risks of moving away from the centre ground. This could weaken fiscal discipline in national budgets and have knock-on effects on funding costs and bond yields. It also has the potential to disrupt and delay policymaking at the EU level, increasing the risk that efforts to deepen financial integration stall.

While these effects mark medium to long-term concerns - and their impacts on bond markets may be diverse, difficult to isolate and to quantify - they are real risk factors. The EU elections could inject political risk into sovereign bond markets in the short and medium term, making the election results a ‘must-watch’ event for fixed-income investors, perhaps for the first time.

These materials are provided for information purposes only and are intended only for the person or entity to which it is sent. These materials do not constitute a distribution, an offer or solicitation to engage the investment management services of Fidelity, or an offer to buy or sell or the solicitation of any offer to buy or sell any securities or investment product.

Fidelity makes no representations that the contents are appropriate for use in all locations or that the transactions or services discussed are available or appropriate for sale or use in all jurisdictions or countries or by all investors or counterparties. Investors should also note that the views expressed may no longer be current and may have already been acted upon by Fidelity. They are valid only as of the date indicated and are subject to change without notice. T

his material was created by Fidelity International. It must not be reproduced or circulated to any other party without prior permission of Fidelity. This communication is not directed at, and must not be acted on by persons inside the United States and is otherwise only directed at persons residing in jurisdictions where the relevant funds are authorised for distribution or where no such authorisation is required.

Fidelity is not authorised to manage or distribute investment funds or products in, or to provide investment management or advisory services to persons resident in, mainland China. All persons and entities accessing the information do so on their own initiative and are responsible for compliance with applicable local laws and regulations and should consult their professional advisers.