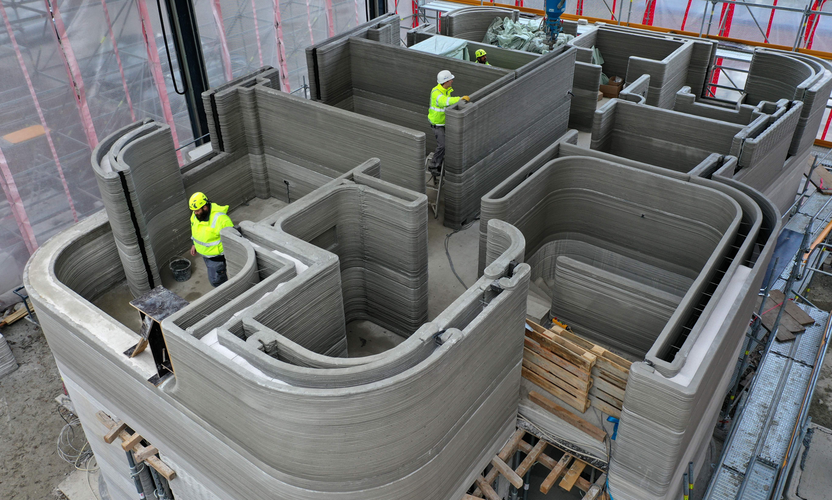 The real estate sector is on the cusp of a green revolution. From being one of the worst carbon offenders, the industry could soon transform into one of the great green success stories.

But it won’t be easy: Europe’s buildings currently account for 36 per cent of the EU’s energy-related greenhouse gas emissions.[1] It’s not simply the energy involved in how buildings are used - their heating, cooling, and lighting - that makes up that statistic, but also the embodied carbon of the materials that go into making them, not least the 20 billion tonnes of concrete poured each year around the globe.

Concrete’s problems lie in the emissions generated in the production of its main ingredient, cement. If the cement industry were a country, it would have the third largest carbon footprint in the world after only China and the US, producing 2.8 billion tonnes of carbon each year[2]. For every tonne of cement manufactured, around 600kg of carbon dioxide is emitted.[3] This is equivalent to a first-class seat on a flight from London to New York.[4] But despite its high carbon profile, cement is still the most used substance in the world after water. China, for example, poured more cement in three years (2011-2013) than was used in the US in the whole of the 20th century.[5]

Clearly, concrete is a product that needs serious innovation, and simply adding a few solar panels to manufacturing sites or offsetting the carbon produced by planting some trees will not do.

But new processes are being developed that could not only reduce the emissions generated by cement production significantly, but could turn cement (and by extension concrete) into a carbon negative material. As the real estate industry adopts embodied carbon budgets, we believe these processes are the only way to reach net-zero carbon targets.

Engineers from Imperial College London and the University of California, Irvine have identified interventions that could reduce the amount of carbon emitted by the cement production process to between 80 per cent and minus 50 per cent of current figures – effectively making the procedure a net-negative one that actively takes carbon out of the atmosphere.

Cement is made by heating limestone (usually by burning fossil fuels) with other components to create an intermediary product called clinker, releasing carbon gas as a by-product. This process alone is responsible for around 7 per cent of all global carbon dioxide emissions.[6] But it’s here that new carbon capture and storage (CCS) systems can stop this carbon ever entering the earth’s atmosphere.

The manufacturer Holcim, for example, is working on more than twenty CCS projects aimed not just at capturing carbon but reusing it, with carbon dioxide from its Lägerdorf plant in Germany to be transformed into a synthetic fuel that can be used at nearby airports.

The kilns which fire the limestone are also obvious carbon culprits, consuming vast amounts of energy, but they can be fuelled with biomass fuels such as by-products from the sugar industry.

In India, for example, UltraTech Cement is using waste from 80 municipal corporations as an alternative fuel, cutting fossil fuel use and reducing the amount of rubbish heading to landfill.[7] In China, by switching to biomass fuel, capturing carbon dioxide, and reusing waste heat to generate electricity, Anhui Conch has reduced its emission density from 855kg in 2017 to 839kg per clinker tonne last year.

Finally, the amount of clinker used in the cement-production process could itself be reduced. This would cut the quantity of limestone that needs to be heated in the first place, thus further reducing the amount of carbon dioxide released when it’s heated. Between 30 and 40 per cent of the clinker used to make cement could be substituted with waste materials like blast furnace slag or coal ash without compromising the strength of the final product.

This is an evolution that the world is now getting behind. At COP27, the concrete and cement industries joined the aluminium, steel, trucking, and aviation sectors on the First Movers Coalition, a global initiative that sees companies harnessing their purchasing power to decarbonise highly-emitting industries. Coalition members commit in advance to buying a certain proportion of low-carbon or zero-carbon products from certain sectors, despite the premium cost, mobilising their collective demand to accelerate the commercialisation of these solutions. This could ensure that zero-carbon or even carbon-negative concrete and cement become more financially viable in coming years.

The art of the possible

This type of carbon-negative cement is just one example of the new class of technologies that will help to revolutionise the real estate sector. But there are other low carbon products, which stretch from polymers dispensed by giant 3D printers, to the downright bizarre: a tough construction substance made from fungi filaments, known as mycelium.[8] A new hydrogen-based plant in Hamburg[9] is already producing construction steel without using any carbon at all. Each of these innovations is a piece of a puzzle, which will gradually reduce the embodied carbon profiles of construction and make meaningful progress towards net zero.

Many of these technologies are still in their infancy, but as both producers and buyers get serious about their commitment to green materials through initiatives such as the First Movers Coalition, the real estate industry can turn from a major carbon emitter into something much more, well, constructive.

This makes sense for investors too, as greener buildings generate higher rents and stickier occupancy rates. It also future-proofs assets against coming regulatory changes. With these technological developments leading the way, a truly green future may be found in the grey stuff.