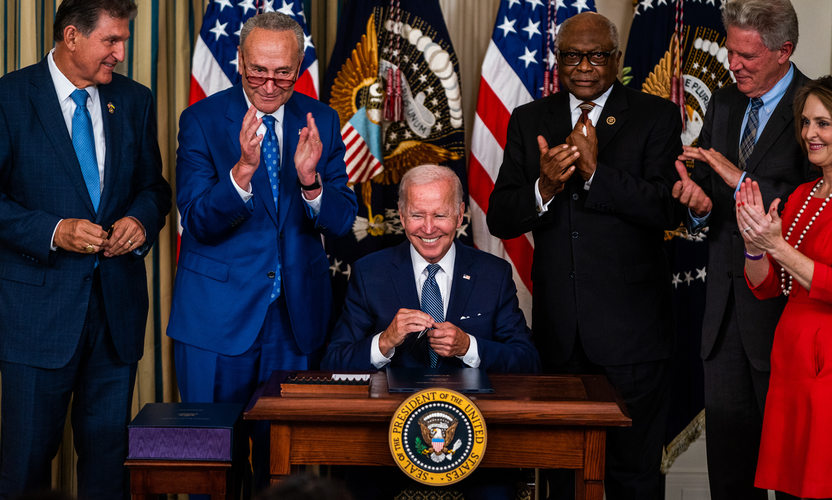 What happened
Last week, President Biden signed the Inflation Reduction Act (IRA), a slimmed down version of the Build Back Better plan. It is a major piece of legislation that provides $485bn to fund climate change and decarbonisation investments ($386bn) and expand healthcare access ($98bn). Funding will come from prescription drug savings ($322bn) and a 15 per cent corporate minimum tax ($313bn), as well as expanded tax collection enforcement and a 1 per cent tax on corporate share buybacks, with total funding at $790bn. The difference of $305bn will be used to reduce the federal deficit, on a back-end loaded schedule.

The key climate provisions in the IRA include extension and expansion of energy production tax credits for low-carbon energy sources (e.g. wind, solar, nuclear and hydrogen) and increased support for electric vehicles. On healthcare, the IRA extends ACA (Affordable Care Act) provisions for three more years and allows the government for the first time to negotiate Medicare drug pricing.

To overcome Senator Manchin’s long-standing opposition to the bill, concessions to the fossil fuel industry were included, notably streamlined permitting for oil and gas drilling on federal lands in the US Gulf of Mexico and Alaska.

Implications
From a fiscal perspective, we don’t expect the plan to have a heavy impact on either US growth or inflation over the next two to three years, as the package was designed to have a fiscal impact of less than 0.1 per cent of GDP before 2027. As Chart 1 shows, this deficit reduction will be mostly back-end loaded.

The longer-term macro impacts will derive from support for decarbonisation and a targeted 40 per cent reduction in GHG emissions versus 2005 levels (Chart 2). The Congressional Budget Office (CBO) projects up to a 1 per cent headwind to US GDP by 2030 from climate change, so if the policy succeeds in combination with global efforts, the benefit would arise through mitigation.

US consumers may see some relief on energy and healthcare costs, if a) domestic oil and gas production increases due to easier permitting and b) significant reductions in drug pricing are achieved.

Outlook
From an economic perspective, as noted, near-term growth and inflation impacts will be muted. From a policy lens and looking towards the November midterms, the unexpected revival and passing of a major climate change and drug-pricing law, together with recent political and Supreme Court developments and some abatement in gasoline inflation, have shifted the odds of retaining the Senate slightly back to the Democrats. However, Republicans remain heavily favoured to take the House of Representatives. From a fiscal policy perspective, this would imply Congressional gridlock after 2022, constraining further action by the White House on tax reform and longer-term spending on social and environmental programmes.

Asset allocation
We remain defensive on high risk of recession in Europe and the US and a halting recovery in China due to its zero-Covid policy. In the US, we continue to anticipate a “catch down” of hard data to a very challenging soft data picture and continued Fed hawkishness, for now.

Look out for more on how this bill will boost US climate investing from Fidelity’s investment team.