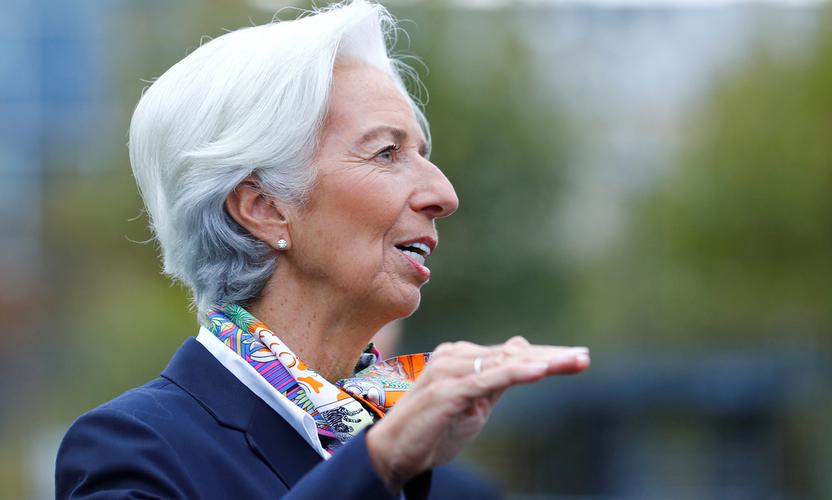 Euro area macro data appears to be stabilising, with the new set of staff forecasts showing both growth and inflation gradually recovering over the forecast horizon. By 2022, Eurozone consumer price inflation is seen trending back towards 1.6 per cent (Q4 2022 at 1.7 per cent). While this is an improvement, it’s still not in line with targets. Meanwhile, growth revisions are moderate with the new 2020 forecast at 1.4 per cent.

The less pessimistic backdrop may be described best by what Lagarde called “risks tilted to the downside but somewhat less pronounced” and should give her more time to settle into her new role - although she won’t be able to sit back for too long. The Governing Council has rarely been so divided, and the ECB finds itself with little will and tools available to do more in the event of renewed economic weakness.

As for the meeting itself, with no change in policy announced, the focus was around the press conference, which served as a ‘compare and contrast’ exercise between the charismatic Draghi and the more diplomatic Lagarde. She cautioned against too close a comparison, insisting that she would have her “own style”.

The first impressions point towards continuity on the monetary policy front, with the ECB expected to remain on a cautious path. It will take time however for the market to get a good understanding of Lagarde’s style, rhetoric and ways of delivering her key messages. Today’s performance was both elegant and assured.

With monetary policy more or less on autopilot and little change expected for the next few months, Lagarde will have to dedicate the first part of her tenure to rebuilding a consensus within the Governing Council with many members who recently expressed unease with the latest round of quantitative easing and negative rates implemented under Draghi.

To this end, she reached out to hawks in the council who may have felt left behind under Draghi, by declaring that she would make it a point in her tenure to take the views of the entire council into consideration.

More fundamentally on this subject, the outcome of the ECB strategy review, which was also formally announced today will be closely watched. This “comprehensive” review will run over the course of 2020 and while lacking a concrete framework at this point, will allow Lagarde to put her mark on the ECB. It will also provide an assessment of the negative side effects of monetary policies implemented so far.

With negative interest rates starting to hit the average saver, as we have seen in Germany for instance, the ECB will have to work harder to defend its policies to the public. In the absence of a meaningful deterioration in the macro outlook, or a further escalation in trade wars, the ECB will struggle to push the monetary policy envelope much further without significant backlash and no obvious benefit to the economy besides asset price inflation.

Among the various options, we believe rate cuts are arguably more likely than an increase in the QE programme, with the former less harmful to banks balance sheets if offset by appropriate tiering, while the latter faces capacity and legislative constraints. Still, while monetary policy stimulus at this point is unlikely to move the dial on the macro front, it cannot be easily withdrawn.

What this means for European fixed income assets

The ECB, like many other central banks, finds itself on a treadmill, having to run just to stand still. The baton, therefore, is now in the hands of Eurozone governments, who have begun to appreciate the need for fiscal policy support. Lagarde reinforced this now well-established ECB message once more by calling governments with fiscal space to action. A broad-based fiscal package however is unlikely to materialise in the near-term; rather we expect more targeted spending plans, as we have seen implemented in Germany this year.

For European fixed income assets, an active ECB is certainly welcome, but will be no panacea. The current ECB QE programme is unlikely to be enough to eliminate downside risks for both government bonds and credit. We have already seen a rise in core government bond yields despite the ECB restarting its QE purchases. There is a risk of higher yields and steeper curves still, particularly in core European government bond markets.

Credit markets arguably price the ECB to perfection but should still be buoyed by positive inflows by yield-starved European savers looking for a positive income stream, while European corporate fundamentals remain robust. Furthermore, if an increase in government bond QE is a tough sell for Lagarde, a larger corporate QE to offset a macro slowdown is more likely, and easier to implement, further reducing the downside risk for the asset class.