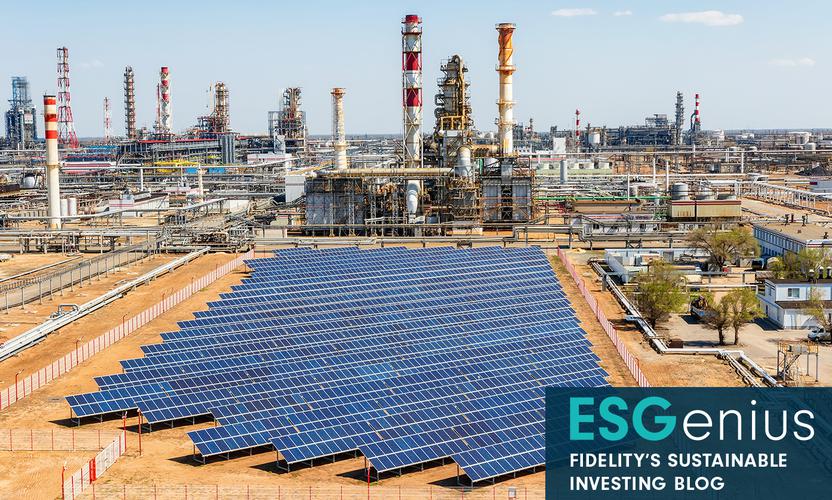 Green investing is not black and white

Some investors believe green investing is black and white, only considering companies with low or zero emissions. It isn’t. The modern economy is built on fossil fuels and it won’t change without consistent effort over the long term, gradually altering practices and even entire industries. Indeed, I believe that unless we tackle carbon intensive industries, decarbonisation will not happen, and catastrophic climate change will be inevitable. For investors, that means embracing companies ‘in transition’.

The Bank of England governor, Mark Carney, put it well when he noted in his speech at the UN Climate Action Summit that: “For sustainable investment to go truly mainstream, it needs to do more than exclude incorrigibly brown industries and finance new, deep green technologies. Sustainable investing must catalyse and support all companies that are working to transition from brown to green. Mainstreaming sustainable investing will require a richer taxonomy.” He referred to that taxonomy as “50 shades of green”.

Part of the reason why companies transitioning to greener operations have not been fully supported by the sustainable investment community is because green bond certification bodies are not recognising these projects and there is a misconception that withholding capital is enough to force companies to change. It’s not. I believe engaging with these types of companies and pushing them to transition faster is a much more effective approach.

It was with some despair, therefore, that I read about the cool reception that shipping company Teekay received for its green bond. The deal was downsized from the targeted $150 million to $125 million because investors objected to its core business of shipping oil rather than the efficiency of the proposed new vessels. This echoes the controversy created in the green bond market when Spanish energy company Repsol launched a similar ‘efficiency’ green bond in 2017.

The amount of carbon dioxide (CO2) avoided for both Teekay and Repsol was significant. The four E-Shuttle tankers Teekay wants to fund would result in CO2 emission reductions equivalent to replacing 60,000 petrol cars with electric ones. Repsol’s efficiency measures saved 1.4 metric tonnes per annum (mtpa) of CO2, roughly the same as scrapping 300,000 American cars. In my opinion, those initiatives should be applauded.

Conversely, when Russian Railways issued a €500 million green bond in May to replace existing electric passenger trains with new ones, it was not subject to the same level of scrutiny as Teekay and Repsol. This was despite no sign that the funding was used to transition to a greener future. The management of Russian Railways admitted that they did not expect any significant rise in passenger numbers from this investment, and efficiency improvements were only modest.

Moreover, Russian Railways generates two-thirds of its revenues and 90 per cent of its operating profit from freight, of which 44 per cent is coal and 15 per cent oil products. So the business is highly dependent on shipping fossil fuels, owned by a state that is the second and third largest oil and coal exporter in the world, respectively. Despite this, the ‘greenness’ of electric trains was sufficient for the bond to receive Climate Bond Initiative (CBI) certification, the gold standard of green bonds.

The CBI has a deserved reputation for boosting the growth and credibility of the green bond market - and sustainable finance more broadly - but this case highlights the risk of relying on simple labels to deliver decarbonisation outcomes. Inconsistencies in the treatment of carbon intensive issuers can undermine the green bond labelling process and create the wrong type of incentives. But green bonds are just one tool to finance sustainability projects and of course there is no substitute for investors doing their own homework.

Capital restrictions are not always effective

So what are the right kind of incentives?

Sector-based exclusions with the intention of restricting external capital flows entirely are ineffective, in my view. Even if investors starved oil companies of external capital, it would make little difference to the planet’s climate trajectory in the short term. These companies have repeatedly proven they can survive all kinds of upheaval and are capable of generating their own capital. They can keep growing by reducing operating costs, cutting dividends, or consolidating to save on overheads and duplicate investment. They could also divert investment to projects with shorter lead times and a more responsive supply function such as shale oil, rather than splashing out on big multi-billion-dollar offshore projects.

Even if oil companies did reduce spending to preserve cash flow and oil supply fell as a result, the oil price would rise quickly in response and capex would increase to meet demand. There is also the danger that a higher cost of capital for oil companies means higher potential returns on offer for those who provide capital to them, making it very tempting for some investors to break rank and fund the sector.

As long there is demand, oil companies will keep pumping - this is the crux of the problem.

Transition is the key to a sustainable future

In freezing out fossil fuel intensive industries, some investors ignore the demand side of the equation. Both Repsol and Teekay made significant strides to reduce their own demand for oil with their green bonds. Teekay‘s vessels are close to meeting the International Maritime Organisation’s (IMO) targets of a 50 per cent reduction in greenhouse gases by 2050. This is real progress in reducing demand for oil.

Some investors would point to the success of pressuring companies to divest coal assets. But this example doesn’t translate well to oil. Coal is a relatively small sector and easily substituted by capital allocators. There are also alternative technologies that are cleaner and cheaper than coal. This is not the case for most fossil fuel intensive sectors at a global level, despite some local successes. Until there are, we should cheer every gram of CO2 that is avoided. Climate change does not discriminate on where carbon comes from and neither should we when seeking to avoid it.

The Italian utility, Enel, made a significant step when it launched its so-called ’transition’ bonds in September 2019. These bonds use key performance indicators (KPIs) to change the investment outcome. If Enel fails to achieve its decarbonisation targets, the terms of the bond increase the payout Enel must make to investors, creating and signalling an incentive towards decarbonisation. This is an important milestone in the sustainable investment industry. It provides an alternative funding route from the rigid green certification process and the potential for ‘brown’ issuers to use this market is substantial.

To meet our global emissions targets, we need an inclusive approach that offers the right incentives. Recognising the role of companies transitioning to more sustainable business models – and rewarding them - is a crucial step towards achieving those climate goals. At the moment, too many transition initiatives are failing to muster support. Unless that changes, my fear is that decarbonisation will remain a promise, not a practice.