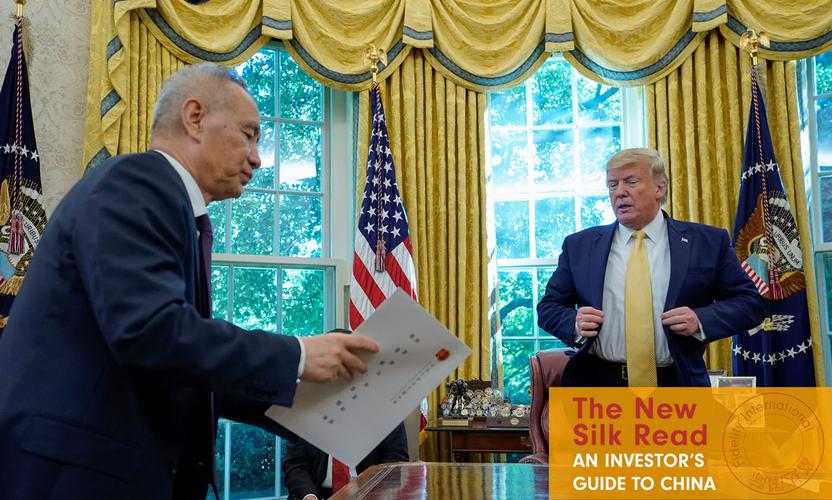 It was a painful process for almost no progress. The outcome was widely expected by markets, and maybe even more diluted. But in the end, a mediocre trade deal - frankly, no more than a trade ‘truce’ - is still better than no deal. Principally, the ‘Phase 1’ agreement signed on Wednesday by US president Donald Trump and China’s vice premier Liu He does avert painful tariffs, and signals no major escalation for a few months. However, reading into the details, this agreement leaves significant scope for bilateral tensions to ratchet up again. In my view, the prospect of successful ‘Phase 2’ negotiations seems as remote as ever.

What does this ‘truce’, however fleeting, mean for investors? Most likely, it will create a more favourable backdrop for risky assets in the near-term. Market focus will turn to more pertinent drivers, such as global growth and the US Federal Reserve’s ongoing balance sheet expansion. But investors shouldn’t ignore the risks and uncertainty still lurking in the tempestuous US-China relationship.

Looking through this short-term ‘win’ for markets and Trump

As a result of the agreement, the two sides have cancelled planned tariff escalation, but went no further. In a slightly negative surprise, there is no clear timeline for rolling back any of the existing tariffs.

With few changes in tariffs came few changes in policy. China has committed to nearly double its imports from the US for the year 2021, albeit this is small fry in the context of China’s overall trade. The agreement also includes promises from China on intellectual property that, while welcome, are likely to be met with justified skepticism on their effectiveness. There is a whole chapter on currency that does nothing but reaffirm what China already promises and does under international obligations.

The dispute resolution mechanism in the agreement allows the US to act in whatever ‘proportionate way’ it sees fit if it believes China is reneging. If China views this as being in ‘bad faith’, Beijing can then simply withdraw from the agreement. While clearly this is in neither side’s interest for now, this leaves the prospect of escalation and deterioration just as alive as it was before the signing ceremony.

It should be noted that most of China’s ‘concessions’ were already on offer before the US went ahead with several painful rounds of tariff escalation. This reflects how entrenched China’s position is. Evidently, no credible path forward has been found, so instead the two sides have chosen to stand still.

Against this backdrop, I see a dire outlook for ‘Phase 2’ negotiations. President Xi Jinping is clearly reticent towards policy concessions, unswerving in his commitment to ‘Capitalism with Chinese Characteristics’. The US concerns yet to be addressed are far more contentious, like China’s implicit and explicit subsidies for domestic companies. This creates the risk of frustration and future escalation. Nothing in the agreement prevents further tariffs or harsh actions against individual companies, keeping uncertainty alive. But given that both sides clearly wanted a temporary ‘truce’, such concerns are not likely to be what drives markets over the next few months.

Watch growth and the Fed’s balance sheet, not Trump’s tweets

Chinese growth remains a key driver of the global outlook. However, this trade agreement was never going to change that outlook significantly. China’s 2018-2019 slowdown was driven more by a domestic deleveraging policy to tackle excessive and dangerous credit growth, which in turn hurt the world’s entire industrial economy. Markets should therefore focus on the impact of China’s stimulus seen last year, and nascent signs of more to come in 2020.

Investors should also monitor whether this agreement is viewed as a success or failure in the US, with Democrats already voicing legitimate criticism. Such perception of his ‘deal-making’ will contribute to Trump’s chance of re-election, a key variable for global markets in 2020. A poor reception could increase the odds that Trump might escalate tensions with China sooner than expected, act more forcefully on trade against the EU or other partners, or trigger higher oil prices by confronting Iran.

Longer term, inevitable uncertainty around US-China trade will continue to accelerate two ongoing trends: supply chains moving out of China into other, lower cost, emerging markets, and China turning toward developing more domestically-focused rather than export-driven industries, such as services and semiconductors.

To the extent the US-China headlines die down for now, investor focus should return to fundamentals instead of geopolitical noise. Last year was predominantly about global stimulus and plunging interest rates. This year hinges critically on whether those twin catalysts will translate to better growth. Here, recent data shows scope for some optimism. Investors should watch activity data, not Trump’s tweets. In my view, this means maintaining a selectively positive stance on risk assets. Emerging markets are particularly attractive, where a stable renminbi, softer US dollar, and larger easing cycles will combine to spur growth higher, against a backdrop of relatively cheap asset prices.