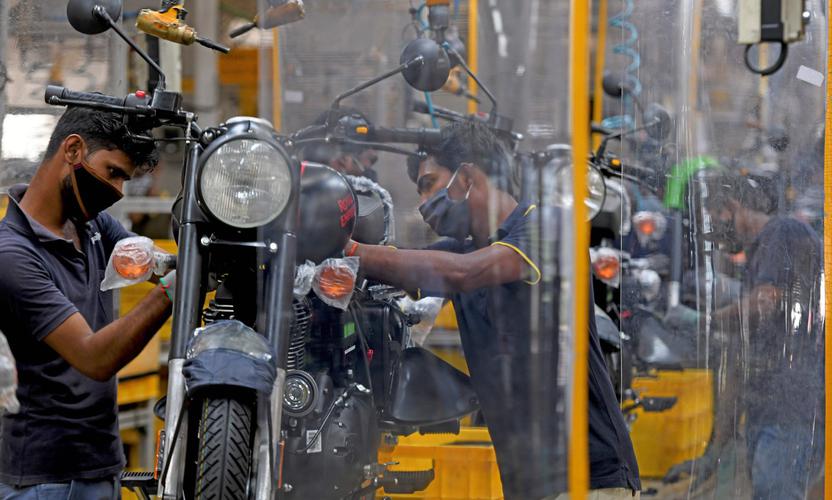 Throughout modern economic history, an expanding manufacturing sector has been essential to boosting employment and incomes. It’s a lesson that’s been driven home repeatedly, by the development of postwar Japan, the export boom in the Asian ‘tiger economies’ and most recently (and emphatically) China’s rise.

However, as the world’s biggest democracy and one of the fastest growing developing economies, India’s own manufacturing sector seems to have stagnated over the past decade due largely to a lack of long-needed reforms. As a result, India’s industry contribution to  GDP growth is now lower than China’s, or that of many Southeast Asian emerging market peers.

What’s to blame? Part of the problem lies in a lack of infrastructure investment, which has effectively served as a bottleneck on growth. Infrastructure development is critical because it improves connectivity and leads to efficiency gains, which will help India reap its demographic dividends.

India’s fixed asset investment has also lagged China’s and been on a declining trend in the past 10 years. In the 1990s, both countries had FAI at similar levels relative to GDP. Even though China has arguably spent too much on FAI in recent years, such investment is needed in the earlier stages of development and that’s where India missed the boat. While China invested in infrastructure when needed, India did not keep pace, and hence could not create the environment necessary for strong growth in manufacturing and exports. As a result, China has grown its share in global trade, while India’s share has stagnated.

Today, India could be at an inflection point in the development of its manufacturing sector, as we think the government’s most recent package of reforms, known as Make in India 2.0, can be a game-changer if executed well.

The plan is to create 100 million manufacturing jobs and increase the manufacturing sector’s contribution to GDP to 25 per cent by 2025 from the current 16 per cent.  It also features a doubling of infrastructure spending in the next five years versus the previous five years.

There are also production-linked incentives and tax incentives, and protectionist increases in import duties/bans in areas where local manufacturing can easily substitute imports. The focus seems to be shifting from high-end manufacturing to import substitution, which seems more achievable. Overall, we expect an immediate contribution of around 0.5 percentage points of incremental GDP growth, and eventually the multiplier effects may lead to a contribution of about 2.5 percentage points.

We think structural reforms like these are the key to unlocking the growth potential of India’s hugely favorable demographics. India has a population second only to China, and together these two countries contain more than one-third of the world’s people (36 per cent).

At the same time, India has a younger population - at 28 years, India’s median age in 2020 is much lower than China’s 38 years. Also, India’s working age population (20-64 years) is growing while that of China is declining. By 2050, India is expected to add 200 million people to its workforce.

Increased investment in infrastructure and manufacturing would also lead to productivity gains per capita. In absolute dollar terms of output per worker, India trails far behind other big developing markets like China and Brazil, not to mention the US or Europe.

With the increase in access to higher education, by 2030 India is expected to have a bigger tertiary-educated population than China. Meanwhile, urbanisation in India is forecast to increase from 35 per cent in 2020 to 43 per cent in 2035.

As a result, income levels in India are rising, as are the number of middle-class and high-income households. This will lead to a corresponding increase in consumer demand, which should translate into deeper penetration of sales of consumer items ranging from white goods to automobiles.

Beyond consumer goods, other sectors that stand to gain from an acceleration in structural reforms include financials, industrials and healthcare.

The winners will be those firms that benefit firstly from structural growth, as penetration of their products and services increase in the country, and secondly, those that gain market share from weaker and less efficient players. For example, we expect this to include India’s private sector banks. Besides benefiting from structural growth, they will continue to gain market share from public sector banks due to their strong deposit franchises, conservative underwriting culture, well capitalised and strong balance sheets, and focus on technology. The growing ranks of young affluent consumers means strong increases in housing demand, which translates into more mortgage business and other forms of consumer credit (not least, credit cards usage).

As a key emerging market and a proxy for global risk appetite, India took the full brunt of investor sell-offs when Covid-19 hit in early 2020. Going into 2021, while uncertainties remain, we expect the economy to continue its recovery path.

The recent rally has been narrow, focused on sectors such as healthcare, IT services and materials. Meanwhile valuations remain attractive across a number of areas including financials and industrials. As India’s economy gradually emerges from the Covid shock and corporate earnings start to improve, we think the long-term structural opportunities will again come into focus.