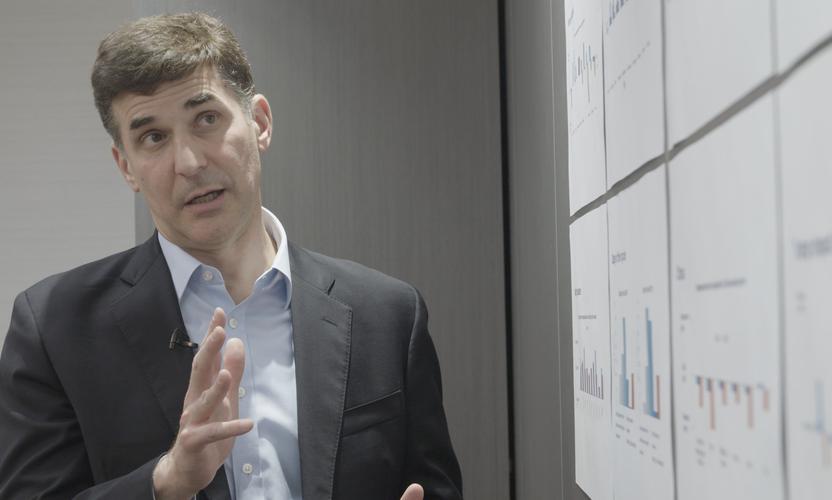 Grethe Schepers: Fidelity's ninth annual Analyst Survey represents a huge collation of data stemming from 16,000 or so meetings that our 165 analysts have had with companies during the past year. And what's immediately evident Is that change in sentiment. A clear rolling over of the optimism from last year 's highs.

Michael Sayers: There's definitely a decline in sentiment globally. I think you have to see that in the context of an extremely strong starting point: 2018 was the strongest sentiment indicator we've seen since we started doing the survey and I think it's important to stress that we do remain in positive territory globally. Every region is in positive territory except China. When you start drilling down into the sectors I think sentiment was down virtually across the board. The exception being healthcare. But again most sectors remain positive. The most notable exception being consumer discretionary. There's a much weaker consumer environment and there is some clear cost pressures both in terms of wage inflation and in terms of transportation costs.

Judith Finegold: One reason that sentiment in healthcare has been increasing is that with concerns about global growth slowdown at the end of 2018 healthcare is seen ultimately as a defensive sector. People may not be able to pay for a new iPhone in 2019 but they're going to prioritise to pay for their drugs.

Marty Dropkin: The question everybody's asking themselves this year is 2019 going to be the year of a recession? And the survey says no. But it's both something we talk about internally and clients are asking quite a bit about it. A lot of it is driven by China and the slowdown in China which is evident, it's clearly happening. The question is how great of an influence will that have across the globe.

Grethe Schepers: One of the things we've picked up on are the various inflation indicators in the survey. How do you read those?

Marty Dropkin: It's become a much bigger focus this year. And so one of the trends that came out of the survey was rising costs. We're seeing anecdotal evidence particularly in the US. The question is how much pricing power do companies have to offset that? And again our analysts feel as if, broadly speaking, that there's not that much there.

Grethe Schepers: Not to talk just about the negatives, actually some of the indicators that we picked up on: dividend growth expected to continue.

Michael Sayers: Yes, I would call dividend outlook one of the key positives of the survey. We are looking for a slowdown in dividend growth in 2019, but it's still 5 per cent. Actually, financials had one of the strongest readings.

Federico Wynne: If you think about the global financial crisis, bank capital bases were absolutely depleted and have been built over the years. We are now in a position where banks core equity Tier 1 ratios and stacks of 'bail-inable' capital have been built to the level which where banks are now allowed by regulators to increasingly pay out more and more of their net income to shareholders. We expect bank dividends to rise over time and the reason is because these dividends are coming from a very low base.

Michael Sayers: It's a similar picture emerging on return on capital in the sense that yes, return on capital is under pressure, but again, for context, 2018 was an exceptionally high score for the survey. I think where we're talking about declining returns on capital we're really calling out the slowing demand environment and the consequent lack of pricing power.

Grethe Schepers: So that brings us really to two factors that are maybe driving some of this demand. One is the US, where we're seeing a shift in attitudes towards the outlook and the other one, where we're seeing probably the most marked shift in the survey, is China - demand in China - which of course sort of hangs over demand globally, possibly as a bit of a dark cloud on the horizon.

Marty Dropkin: The other really interesting thing in China is our analysts are looking at an increasing number of defaults in China. Now, that could be scary on the surface of it. I actually think that's a good thing because we've come off of a very long environment where capital flows into companies haven't really been watched very carefully. The government knows this and they're starting to manage through it.

Nitesh Kathuria: When I'm thinking about Chinese corporates: they rely on offshore funding channels but also a big part of their debt capital structure is still reliant on onshore banks and onshore corporate bonds. You know, with deteriorating liquidity conditions in the second half of last year a lot of corporates were coming under pressure. Policymakers have actually come out and announced regulation that enables some of these companies to access capital market more easily.

Grethe Schepers: We've been asking this question about the analysts' view on the US under Trump, as it were. For the past few years they thought overall his policies would be marginally positive. That's changed this year. Why?

Marty Dropkin: 2018 was I think the watershed moment for ESG where we saw a big jump up in the expectation by our analysts that companies would be addressing ESG factors more prevalently. Companies are paying more attention to ESG but we've almost moved on and now we're focused on disclosure. And so now we're at the phase where, are companies talking about ESG? Yes. But are they giving us enough information that we feel like they're approaching their sustainable efforts diligently? And I think that's where our Analyst Survey suggests there's still room for improvement.

Grethe Schepers: So, there's an awful lot of food for thought in this survey for this year but we look forward to see how the year develops.

Michael Sayers: We do indeed. Thank you.